I was close enough to feel the ground shake when Israel launched the first airstrike on Gaza in an eight-day war on the afternoon of November 14, 2012.

I had just left a women’s centre where for a week I had been teaching a photography workshop. I still had the centre’s camera and lens in my bag.

By that point I had spent two years learning photography and taking pictures of everyday life or local activism, occasionally working for aid organisations or a local women’s magazine. I would borrow cameras and post on social media. Local journalists would sometimes mock me when they saw me arrive at a protest or funeral. “The Facebook photographer has arrived,” they would say. But I wanted to be a photojournalist – despite everyone in my life discouraging me – and knew that this war could be my opportunity.

It wasn’t about the job or even making a living. I wanted the world to see what was happening through my photos, through my eyes.

This was my chance to cover something big and gain experience.

It wasn’t about the job or even making a living. I wanted the world to see what was happening through my photos, through my eyes.

I rushed to the nearby Shifa Hospital and didn’t hesitate as I walked into the morgue – the only woman there – and began taking photos of the Hamas leader and the others who had just been killed. I stayed there for hours as airstrikes continued into the night and the bodies kept coming in.

I spent much of those eight days in the morgue or embedding myself with other journalists as they raced to the scene of the latest attack. In addition to taking photos myself, I watched the photographers who had been at this for years to see how they worked, where they stood, what lenses they used and what angles they shot from.

But what I wasn’t learning was how to pitch or sell my photos to local or international media. So for those eight days I continued to just upload my photos onto my Facebook page. Local Facebook pages began republishing my photos and people began to learn my name and see my work. After the war, the centre where I had been a trainer commissioned and published most of the photos I had taken.

After that no one called me just a “Facebook photographer”. But sometimes they called me crazy. 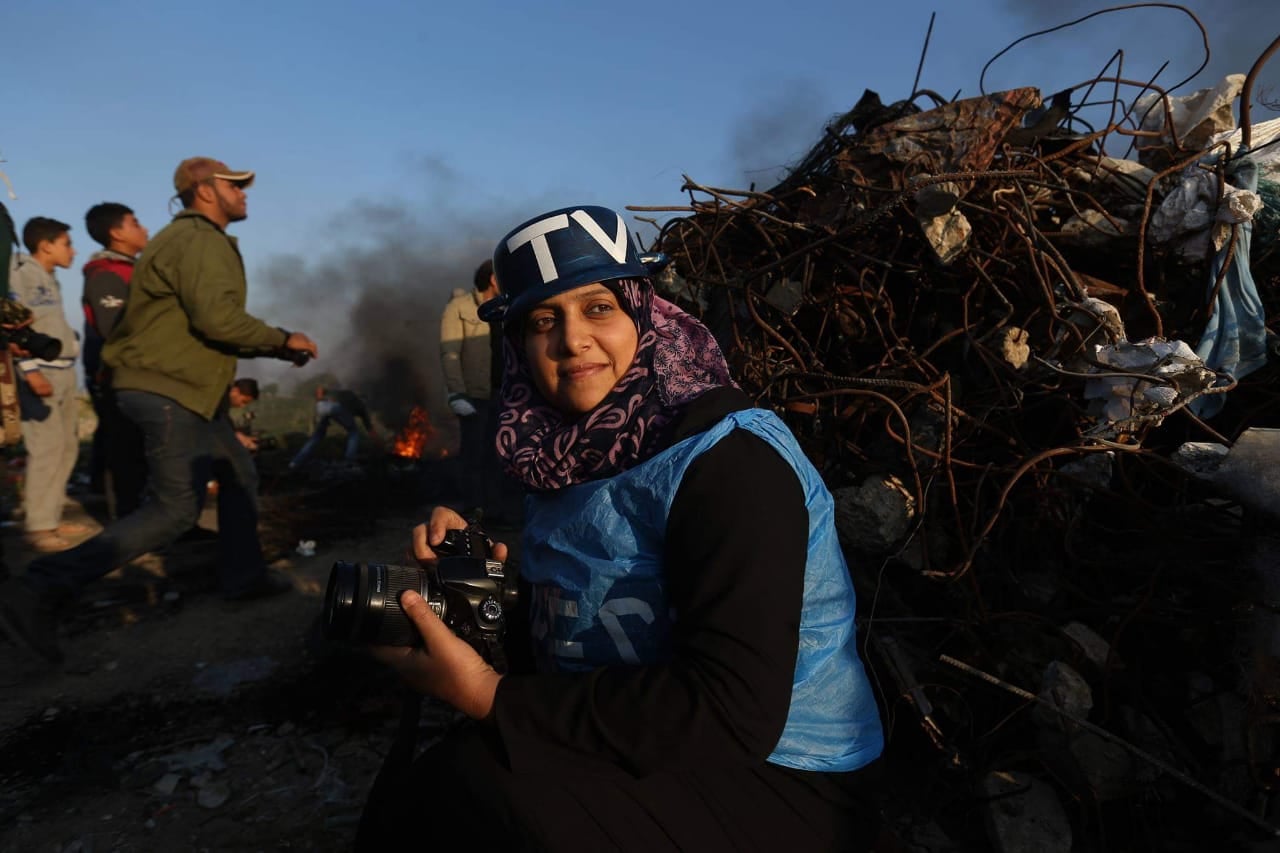 In autumn 2013, I was eight months pregnant with my fourth child. Every Friday, young men would gather at Gaza’s northern border with Israel to protest the blockade. Israeli soldiers would fire tear gas, rubber bullets and occasionally live bullets. I didn’t hesitate to go.

At one point a foreigner, a female solidarity protester, saw me choking on tear gas and looked down at my very pregnant belly. She couldn’t comprehend what she was seeing. “You are crazy,” she said repeatedly, as she kept looking at my baby bump. But I just laughed. I knew what I was doing.

By the time the 51-day war began in 2014, I had bought my own camera after asking a friend for a loan. I also felt more confident to cover the war on my own instead of embedding with other photojournalists. During that war, I sold some photos to a small international photo agency, and continued to post everything on my Facebook account.

I wasn’t worried so much about dying or being injured. I just wanted to continue my work.

From there, editors at the New York magazine saw my images and reached out to me. The magazine wrote a brief article about me and published nine of my photos. Among them were some of the most difficult photos I had taken including that of a man holding the body of his baby boy who had just been killed while still in his mother’s womb.

I was proud that my photos were reaching the outside world.

Halfway through the war, Israel launched an all-out assault on the eastern neighbourhood of Shajaeah, killing dozens of civilians in one night. In the wake of the attack, journalists descended on the neighbourhood to document the death and destruction. The anger among residents was bubbling over and some of them directed it at us.

One man, distraught at the loss of his home, grabbed my camera and the cameras of two other journalists and smashed them on the ground. I was stunned. I gathered some of the camera pieces, including the memory card, and went home where I burst into tears. There was a war and I didn’t have a camera to document it. I was also still paying my friend back for the loan she gave me to buy the camera. 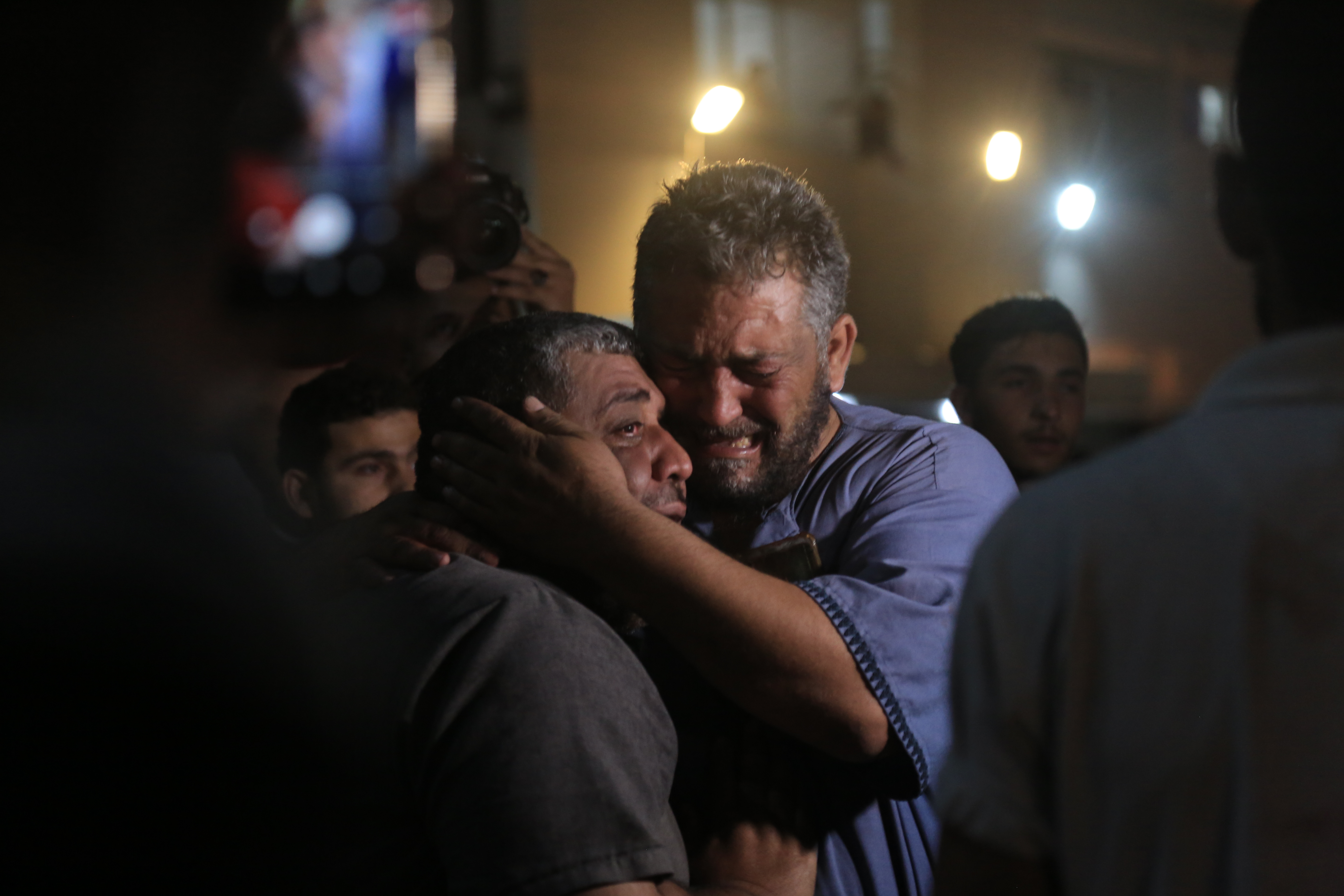 But there wasn’t time for me to feel sorry for myself. I resolved to take my memory card and headed to Shifa Hospital. I found photographers that I knew, and when they were taking a break I asked if I could borrow one of their cameras for a few hours.

I also posted requests on Facebook asking who had a camera I could borrow. Throughout that war I ended up using nine different cameras.

In 2015 and throughout the year, young Gazan men would gather along the northern border after Friday prayers to protest and face off with the Israeli army at the fence. The soldiers would fire tear gas and rubber bullets.

At one point I saw a boy around 12 years old fall in front of me. People began yelling that a gas canister had hit him in the head, lodging into his skull. I took photos of him as they carried him away, his face smeared with blood.

In the days that followed I began to wonder: what if I had been in his place? I wasn’t worried so much about dying or being injured. I just wanted to continue my work.

I realised that I needed a vest and helmet. Even if they weren’t enough to save my life or protect me from injury, they would identify me as a journalist rather than a protestor.

But there was no way I could get or afford them. The closest thing I had to a helmet were the pots in the kitchen. I found an aluminium pot that fit my head and went and bought bright blue paint that closely matched the colour of Press’ flak jackets. Then I found a blue garbage bag which I made into a vest. Using masking tape, I wrote on the vest, “PRESS”, and on the pot, “TV.”

I wanted to send the message that even as a freelance journalist, I had the right to be protected.

In that moment, I felt like I was seconds away from becoming the image that I had spent my career chronicling. 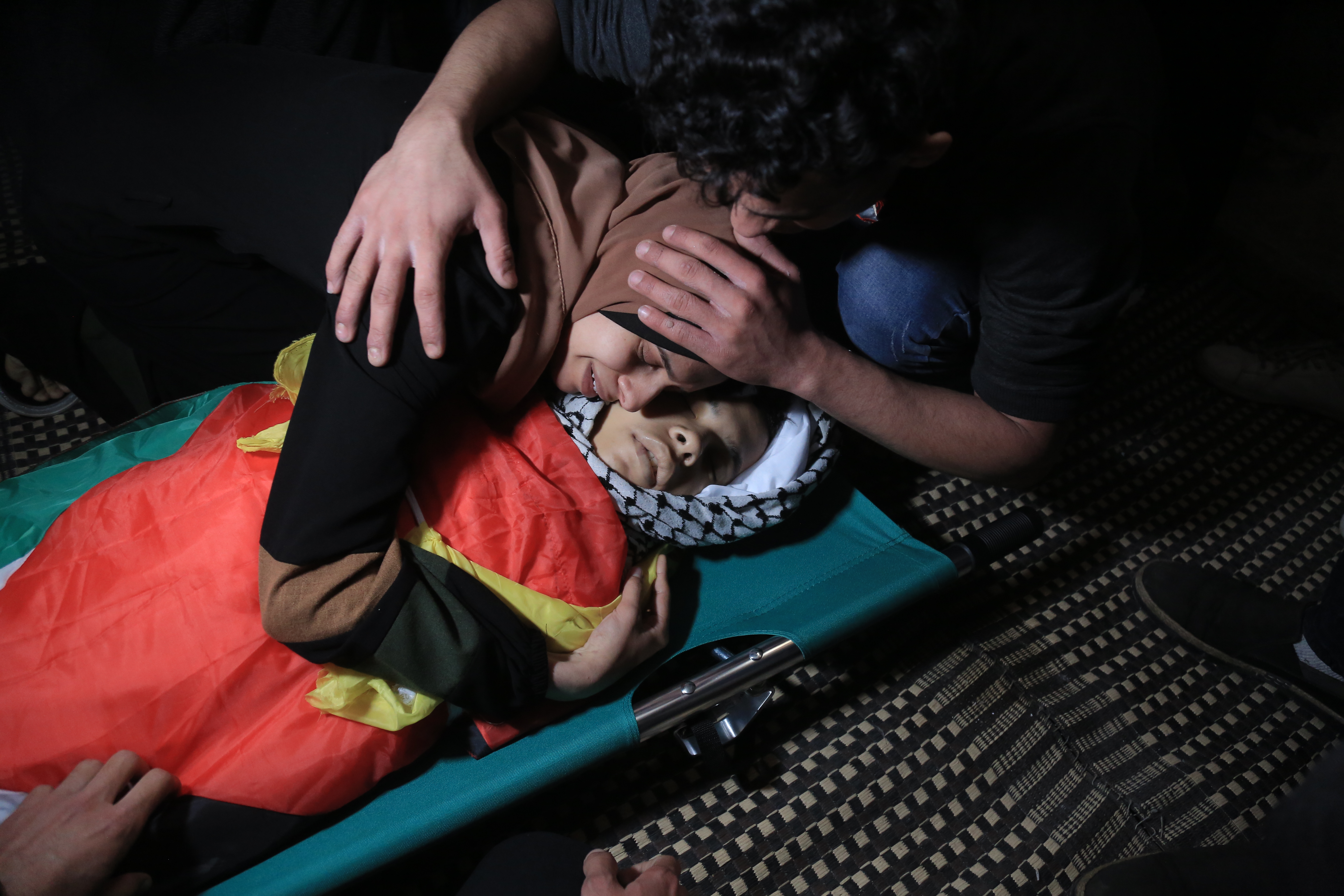 But then I hesitated to wear the makeshift helmet and vest in the field, worried people would mock me. I was already the target of stares and comments as I was often one of the very few female journalists in the field. Twice as I was preparing to leave the house I was about to put them on but changed my mind at the last minute.

A month later I mentioned the vest and helmet to a friend and fellow freelance photographer. He insisted that I needed to wear it at the border and offered to publish photos and videos of me. “This will send a strong message,” he told me.

So the next Friday I took them with me to the border, and I put them on without hesitation.

As soon as I did, the jokes began: “What are you cooking?”

“Have you made maftool ?”  (A traditional Palestinian dish)

I didn’t care. I wanted to prove that I was a journalist like anyone else.

My friend posted the photos on Facebook and immediately international journalists began reaching out to me, to write about my story and career. By that time, I had also joined The Marie Colvin Journalists’ Network. They contacted me and asked for my measurements. They had mentioned my story during a fundraiser in London and a journalist had offered to directly cover the cost of a flak jacket and helmet for me. *[1] *

It was the first time I felt that I had people in my corner supporting me. And it made me feel even more like a real journalist who had a right to be in the field like anyone else.

If I knew my home was about to be bombed, I would take that blue pot and plastic vest – they represent my daringness and boldness. 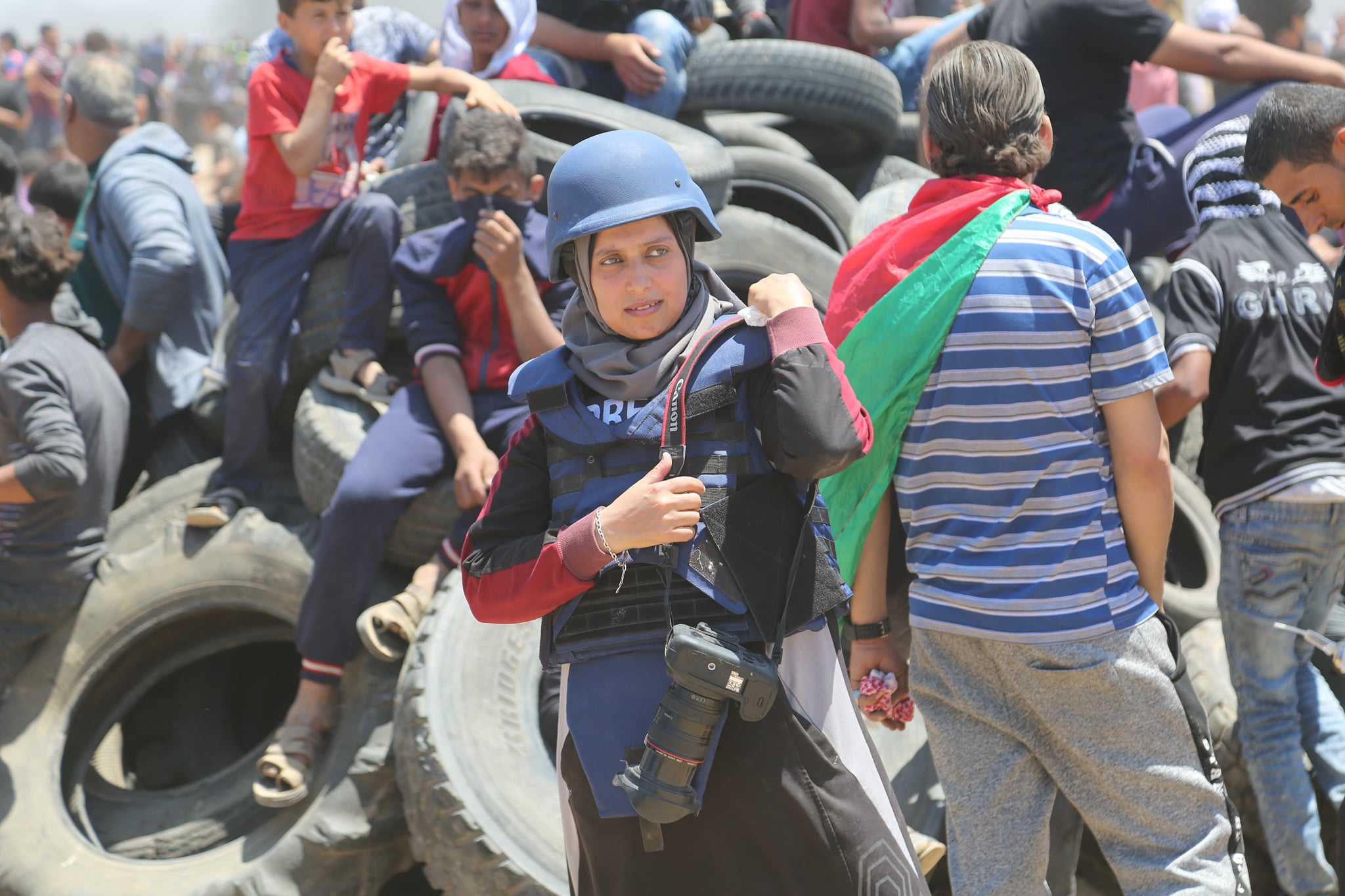 I put the pot and bag in my closet. Every once in a while, I take them out and look at them as if they are photographs.

Last year during the May 2021 war, I started freelancing for The New York Times. It was a relief to be working for one newspaper throughout the conflict and not have to worry about both covering a war and where to publish my work. I was also so happy that my photos would be part of the coverage of Gaza in such an important newspaper and seen around the world.

One day, about halfway through the conflict, I was headed to the morgue because I had heard that a young girl had been killed in an Israeli airstrike, when my own children called. My daughter was screaming that a warning missile from Israel had hit our building and they were terrified that our apartment was about to be destroyed in a subsequent strike.

The roads leading to our building had been blocked off in anticipation of the strike and I couldn’t get to them. So I told them to meet me on a side street, where I found them in the same state of panicked dishevelment as the people I had spent years taking photographs of during such moments. The fear on their faces, my 9-year-old son barefoot, my 17-year-old daughter wearing a prayer shawl hastily thrown on before they fled our home.

In that moment, I felt like I was seconds away from becoming the image that I had spent my career chronicling.

It reminded me of how sometimes in previous wars when I was taking photos of children who had been wounded or killed, I would lower my camera to scrutinise their faces to make sure it wasn’t one of my own children.

After the war, documentarians doing a film on Gazan journalists asked me what I would take if I knew my home was about to be bombed. Sometimes before an airstrike, Israel gives a bit of a warning for people to leave their homes. In that mad scramble people might take gold or money or legal documents.

I would take none of those.

I would take that blue pot and plastic vest – they represent my daringness and boldness in pursuing this career and to me that’s more valuable than gold.

**Editor's Note: Providing personal protective equipment is not one of MCJN's standard support services; this was an exceptional situation in which an individual donor wished to support Samar in this way.