In the summer of 2019, there was an international media outcry over the case of Moroccan journalist, Hajar Raissouni, who was imprisoned for undergoing an illegal abortion, despite her proving otherwise through medical tests. At that time, Hajar was working for “Akhbar Elyom” – an opposition newspaper in Morocco known for its criticism of the ruling regime.

The case was a major embarrassment for Morocco, and in October 2019 Hajar was pardoned by King Mohammad VI. This should have been the end of her troubles, but the authorities decided to go after her again after she came out saying that the royal pardon was not an honour, but a reversal of the injustice she had suffered.

Hajar currently resides in Paris, where she is completing a Master’s degree at the Sorbonne University.

Let’s begin from October 17, 2019, when you were released from prison with a royal pardon. It was supposed to be a victorious moment for you. But you left Morocco shortly after that. Can you tell us the reason why?

If I hadn’t left Morocco, I would’ve gone crazy or committed suicide

I thought that after being released from prison, I would start a new chapter and get back to my life. But shortly afterwards, a new series of harassment began.

Only two days after being released, I was attacked by “Barlamane.com”, a website close to the government. They said the royal pardon didn’t mean that the charges against me weren’t true. Police cars would park outside my house and monitor my movements. After three months, I returned to work for the “Akhbar Elyom” newspaper, but I constantly felt like I was being watched. On the 22nd May 2020, my uncle Suleiman Raissouni –  who was the editor-in-chief of “Akhbar Elyom” – was arrested, and our family began getting harassed even more. I remember one time when my cousin came to visit me at home so we could discuss what was happening. We had placed our mobile phones far away out of fear that we were being tapped. The next day, details of our private conversation were published on the same website that attacked me.

I was living in trepidation. I couldn’t sleep thinking they would knock on the door at any minute and arrest me. I was afraid they would take nude photographs of me in my own home, as they’ve previously done with another member of my family. I couldn’t tolerate the idea of going back to prison, or going through everything I’ve gone through yet again. If I hadn’t left Morocco, I would’ve gone crazy or committed suicide.

In the beginning, I was denied the right to leave, and my husband, who is a Sudanese national, was told to leave without me. I was afraid they were plotting another accusation against me. But then, a government official from the Ministry of Interior intervened to allow me to leave Morocco, on condition that I refrain from writing about Morocco, cease my human rights activism, and remain quiet. 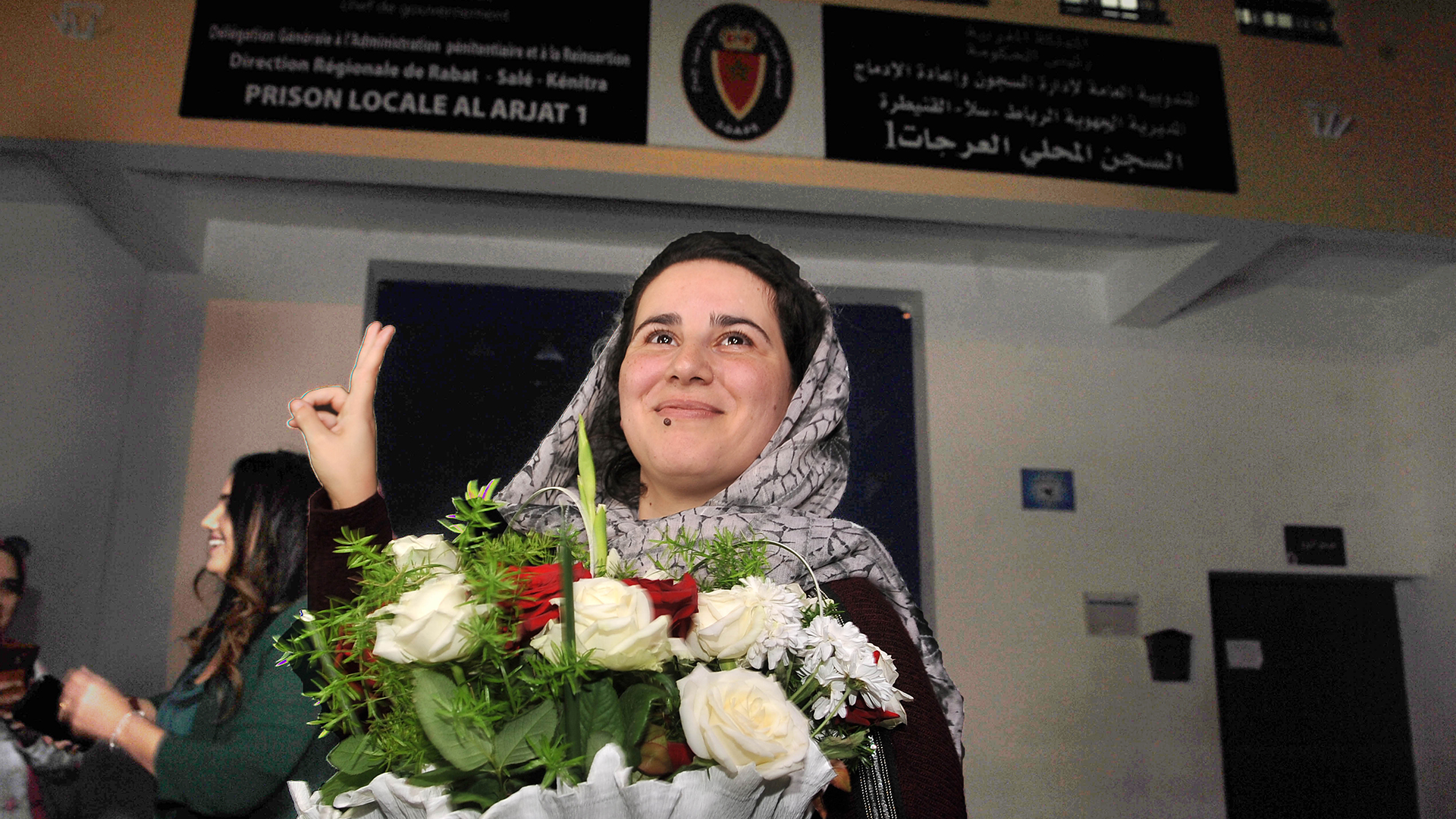 Describe to us how your life was in Sudan. Were you able to remain silent about what was happening in Morocco while observing the situation from afar?

I arrived in Sudan at the same time as my colleague, journalist and activist Omar Al-Radi, was arrested in Morocco, so I spoke out about his case. The same government official who helped me leave Morocco contacted me and threatened me and my family with severe consequences if I continued to write. But I decided to continue because it is my responsibility to do so for my colleagues and country. After a while, I discovered that my phone, as well as my husband’s and those of other family members were all hacked by Pegasus spyware. It happened after Amnesty International published its report about cyber-attacks against journalists and activists in Morocco.

I had expected to find work with international media outlets in Sudan fairly quickly but was surprised to find out that things weren’t so easy.

Life in Sudan wasn’t easy for me, even though people there are very helpful and kind. The lifestyle was different, not to mention daily struggles such as electricity outages and water cuts, as well as the hot weather. I couldn’t cope, especially because I come from a mountainous area in Morocco. Sitting at home and trying to work remotely after years of working in the field and being active also created an imbalance in my life.

What I feared the most was having to make decisions that I really didn’t want to make, especially seeking asylum

Nevertheless, leaving Morocco gave me a renewed sense of energy to continue defending my colleagues who were detained, and to speak out against human rights violations. Several female colleagues and I established a human rights movement called Khmissa, for defending women's rights as well as the freedom of speech and press in Morocco. We organised solidarity campaigns in collaboration with international organisations to support female journalists and human right defenders who suffered from defamation and other violations.

The time I spent in Sudan was the most active when it came to monitoring the cases of my colleagues and campaigning for them. But the threats from Morocco did not stop.

When we met you in March 2022 at an international journalism forum in Tunis, your passport was due to expire and you were unable to travel freely. Can you describe what was happening at the time?

Indeed, I was living through a very difficult time because my passport was about to expire. The Moroccan consulates in Tunisia, Egypt and Sudan all refused to renew it for me. I couldn’t sleep thinking of my fate without owning any legal documents. What I feared the most was having to make decisions that I really didn’t want to make, especially seeking asylum.

There was no legal justification for their refusal to renew my passport. The authorities were only trying to close in on me. I was even denied entry into Tunisia in the beginning, had it not been for international organisations intervening and pressuring the authorities to reverse their decision.

Sudan was also going through political unrest at the time, so I felt that I had nowhere to go and settle down. I became worried and anxious, and at times I felt isolated from the rest of the world. But thank God, difficult times always pass, making us stronger and more capable of facing life.

You rejected the idea of applying for political asylum in a European country. Why is that?

Asylum means being completely cut off from your homeland, your family, and friends. It means estrangement and loneliness. I always have hope that I will return one day and live  a stable and secure life in Morocco, without fear of arrest or attacks on my freedom or my personal life. That hope would have disappeared had I applied for asylum.

I am a Moroccan national despite everything I went through. I love my homeland and I will fight for it to become a democratic country that respects human rights. And so, I refuse to give up and turn into a second-class citizen in another country.

It is my duty as a journalist to defend freedom and human rights and justice, and to investigative and expose any violations of those rights

How did you eventually manage to travel to France?

I was in Tunisia still searching for jobs with international media outlets and organisations. But to date, I haven’t received any offers. That long wait prompted me to think about establishing my own media project. As soon as I started planning for it, I received a letter of acceptance from the Sorbonne University. I had forgotten that I had applied to study for an M.A. in Political History of the Middle East and North Africa there.

That news made me think carefully  about what I really wanted. I didn’t receive a scholarship, which meant that I needed to work to pay for my university fees, and probably put my career on hold for a couple of years. In the end, I decided to enrol myself at the university. After a lot of anguish, I managed to renew my passport, got my visa, and left for Paris to start a new chapter in my life.

Do you fear any further repercussions if you continue to speak about what’s happening in Morocco?

Of course. Fear is a human feeling. My family is also putting pressure on me because they’re afraid of the repercussions if I continue to speak out about the situation in Morocco. The authorities may attempt to slander me, and my conservative family cannot tolerate that.

But what I’m doing today is a duty towards my country and detained colleagues. It is my duty as a journalist to defend freedom and human rights and justice, and to investigative and expose any violations of those rights.

This advocacy has become a part of me. I feel there is a force bigger than me that is pushing me to go down that road - despite the stress, anxiety and loss of friends who are now scared of communicating with me.

Morocco is worth the struggle for freedom and democracy. Some may see this as idealism, but those who experienced injustice cannot accept it anymore.