Najoua Hammami is an award-winning investigative journalist. She also delivers training in journalism, immigration and asylum issues. Her professional career has been full of challenges, most of all her resignation from Al-Hiwar TV in 2018 after her programme was cancelled due to government pressure.

As the political crisis escalated in Tunisia, and journalists were being targeted, Najoua nearly left the profession, had it not been for the Arab Institute for Human Rights who offered her a chance to start a community radio project in one of the poorest neighbourhoods in Tunisia, Saida El-Manoubia.

Najoua currently runs Essaida FM radio, and her programmes have contributed to achieving tangible change for the people living there.

Where did the idea of ​​establishing a community radio station in the Saida neighbourhood in Tunis come from?

We at the Arab Institute for Human Rights have been dreaming of establishing a radio station that would spread the culture of human rights and give a voice to the voiceless.

Most residents weren’t aware of their basic rights, hence ​​establishing a radio station that informs them of their rights and seeks to change any negative portrayal of them in the media.

The radio station is in Saida El-Manoubia, one of the poorest neighbourhoods in the capital. It lacks public services, as there are no hospitals or police stations. There is a single health clinic with almost no facilities, and two dilapidated schools. The illiteracy rate in the area is approximately 70 per cent, most of its residents are unemployed, and only 3 per cent work in marginalised sectors.

The media in Tunisia continuously portray residents of this neighbourhood in a negative way. They only cover news related to crime and drug trafficking. Sometimes – and without any legal justification – the police randomly stop-and-search people, just because their ID cards show they are residents of Saida El-Manoubia or the nearby Hilal neighbourhood.

The Arab Institute has been working to bring about change in this area since 2011. So we organised a series of visits to the neighbourhood and asked the residents about the programmes they would like to listen to and the issues they would like to discuss, and we built a positive relationship with them. We realised that most residents weren’t aware of their basic rights, hence the idea of ​​establishing a radio station that informs them of their rights and seeks to change any negative portrayal of them in the media. 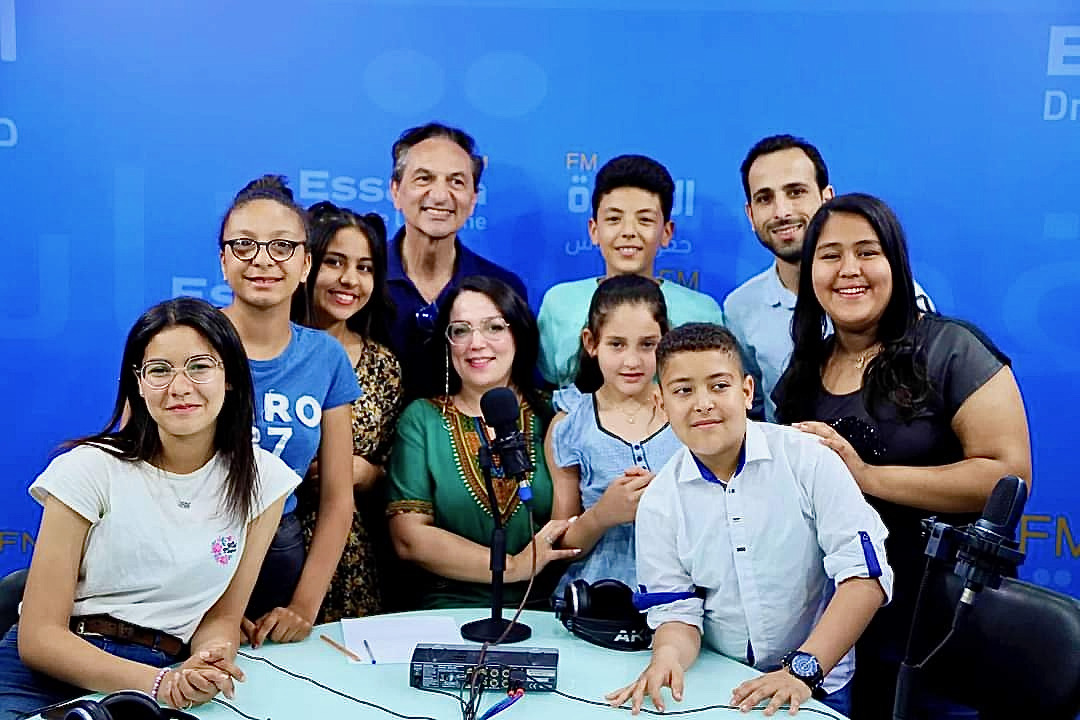 How did you gain the residents’ trust so that you could establish the radio station?

We had to hold a meeting with the residents who questioned our intentions and asked us to clarify the objectives of our radio, and gradually, their notion of ​​us began to change. We also have a positive relationship with the neighbourhood children – the institute organises activities for them – and that also helped to improve our relationship with the adults in the neighbourhood.

What programmes does the radio broadcast?

All topics discussed on "Essaida FM" originate from the neighbourhood itself. Our editorial policy is based on raising issues and then finding solutions for them.

I host a morning show called “Sabah Essaida” that airs every Monday and Friday, where we discuss issues raised by the residents, such as poor services, violence against women, underage marriages, and other matters. We also invite officials to discuss these concerns.

I got the idea for a story about women’s work after attending a workshop organised by The Marie Colvin Journalists’ Network on gender-sensitive journalism. I interviewed some women in the neighbourhood, who told me that the state was supposed to implement a project to economically empower women, but they never actually did. So we invited officials from the Ministry of Social Affairs to the show, and they promised to implement the project. They were true to their word, and some women received grants to open pottery-making workshops.

These children never believed in a future for themselves. But now, and because of their insistence, an adult education centre was established.

We also hosted the Education Minister and asked him about two schools in the neighbourhood that were in danger of collapsing and lacked basic facilities. We discovered that there was nearly 1.5 billion Tunisian Dollars (450 million US Dollars) allocated to the repair of these two schools, but that hadn’t been spent. So we presented that episode from inside one of these schools and invited private institutions to attend, and were able to obtain a guarantee from the Ministry of Education, in the presence of the other guests, to fund the project.

A large portion of our work, both at the radio and the institute, is with the children. There are no spaces for them to play in the neighbourhood and there are no libraries either. So I carried out intensive training courses for children between the age of 8-15 in radio broadcasting and news production.

Every Sunday, they produce and broadcast their own programme called "The Young of Essaida", where they discuss issues that concern them. These children were the ones who built the trust between us and residents of the neighbourhood. They go out on a weekly basis to shoot their reports and present their programme. Currently, my role is to simply conduct an editorial meeting with them on a weekly basis.

These children didn’t think they had  a future. The most they ever wished for was to finish high school, and then perhaps work in a shoe factory. There was no ambition to even finish school. But now, they even managed to convince their parents to study, and because of their persistence, the institute established an adult education centre. 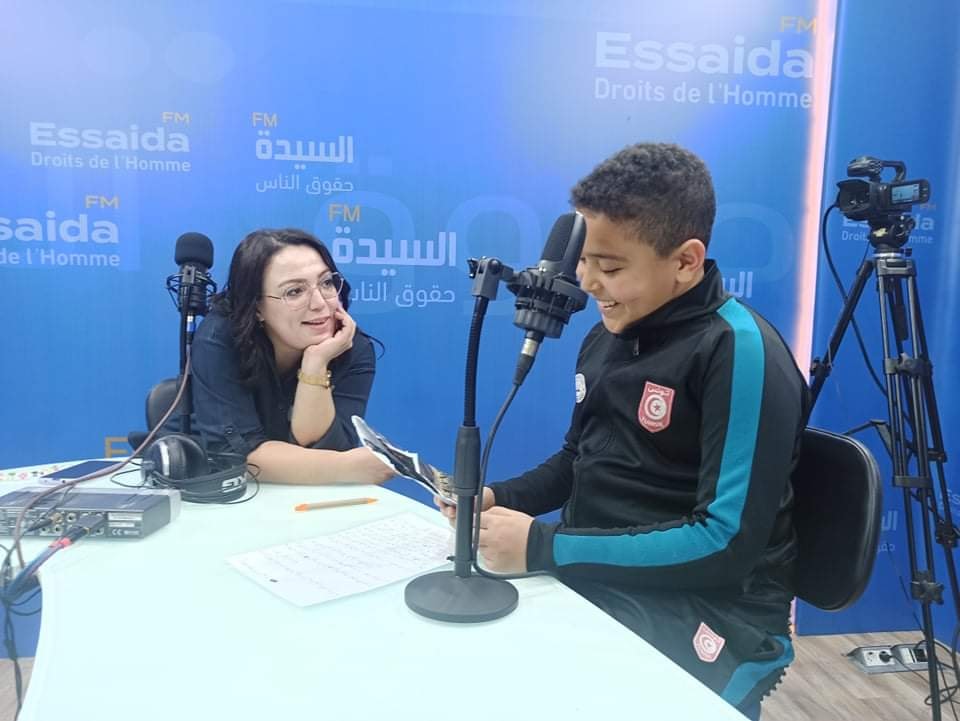 What about the political crisis in Tunisia and its effect on freedom of the press and speech? To what extent does this affect the work of the radio?

The situation in Tunisia today is very dangerous. Many journalists have been suspended and threatened. Instead of applying Decree Law No. 116 on the freedom of audio-visual communication, journalists are being charged under laws related to terrorism and national security.

Our radio is not immune to this, but we are protected to some degree because we don’t talk about politics. We interpret laws and educate citizens about their rights and what to do if they’re arrested or subjected to physical assault. At the same time, we stand in solidarity with all media outlets that have been subjected to harassment. In March this year, we participated in the general strike that was organised by the Journalists' Syndicate.

So far, we haven’t been criticised by any party because of our work – we are focused on solutions-based journalism, which in return has helped increase the number of listeners.

Thanks to the support I received from MCJN, I am no longer afraid, because I realise that there is an entire network that can support me mentally and emotionally.

However, we do face other challenges, the biggest of which is how to ensure that we stay on air because we have limited financial resources and we rely primarily on support from institutions such as Konrad Adenauer and UNICEF. There are only five employees, and the rest are volunteers, so we can't ask too much of them.

How has this experience impacted  your career, especially since you faced numerous challenges as a journalist prior to the establishment of the station?

I resigned from Al-Hiwar channel three and a half years ago. The programme that I was presenting got cancelled following a phone call from the Prime Minister’s office because the topics I raised were bothering them. There were no other job opportunities available, and I had to decide whether I should continue with journalism, despite the heavy price that I could pay, or leave the profession entirely.

During that time, I was approached by the Arab Institute to run their media and communications office. I agreed because I wanted to avoid problems and experience a sector that wasn’t too far from journalism. Indeed, I learned a lot about the law and how to raise issues related to human rights, and this prompted me to explore solutions-based journalism. I realised that the media could have a greater impact if it connected better with people and understood its role in society. I was offered other opportunities since I joined the station, but I turned them down, despite the privileges they would have offered, because I want to focus on this project.

My membership with The Marie Colvin Journalists’ Network has certainly played a big role. Thanks to the support I received from the network, I am no longer afraid because I realise that there is an entire network that can support me mentally and emotionally, and that’s something you don’t find in other organisations.